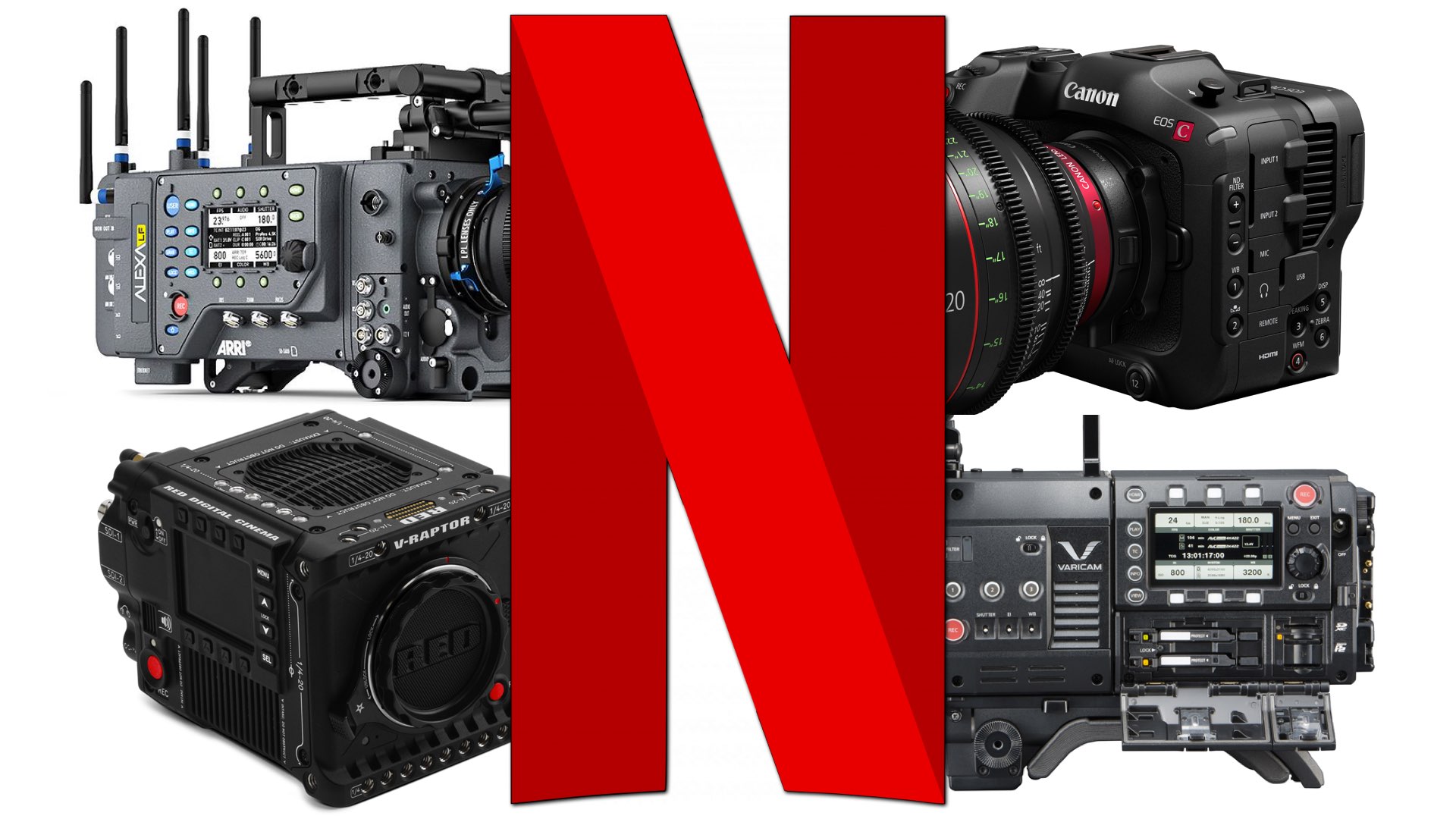 While it shouldn’t be the only consideration, purchasing a “Netflix approved” camera might be a worthwhile investment, especially since many cinema cameras are a significant expense. It might be advantageous knowing that your investment at least has the specs required to ensure the expected quality of a Netflix Original. So what goes into Netflix’s camera selection process? Well here’s everything you need to know straight from Netflix:

A recent educational video published by the Netflix Production Technology Video Resources  has shed some light on the how’s and why’s of its approved camera list. In the video, the company’s camera systems specialist, Kris Prygrocki answers the burning question we all have, revealing why Netflix even has an approved cameras list, and how it determines what gets included on that list.

So why have this list in the first place? Netflix wants filmmakers to use the most advanced camera technologies.

“One of the biggest priorities for us as a studio is helping our filmmakers do their very best work. We want our filmmakers to not just feel enabled, but also encouraged to use the latest and greatest capture technology that is out there to tell their stories,” Prygrocki says.

However, when determining what gets approved and what doesn’t, Prygrocki maintains that it is not just about 4K capture. High resolution is just one factor. Other important factors include Dynamic range, Colour reproduction, Noise performance, Sensor readout speed, Compression, Chroma subsampling, Bit-depth, and more. To test all of these factors, Netflix has a set of tools that it uses to evaluate cameras that are being considered for its approved cameras list.

“We do our best to remain as objective as possible by doing a multitude of tests and not just relying on one singular solution. We also make a point to stay in communication with the manufacturer to ensure that we are operating the camera system and testing it in the best way possible to achieve the greatest results. As informative as these controlled tests can be, they don’t always tell the whole story,” Prygrocki continues.

Netflix says that the company is transparent when it comes to putting its specifications for Approved Cameras together, and all of its requirements are built on years of experience and on the feedback it gets from professional  filmmakers on their productions as well as the filmmaker community at large to understand what features are important to them. Further to this, Netflix also states that most of the feedback isn’t related to image quality.

According to Prygrocki other crucial considerations are related to the camera’s stability, reliability, and robustness during professional productions. These factors include Proper thermal management (is it going to over-heat on a professional film-set?), the reliability of the media (to prevent data loss), NLEs support of the chosen codecs, file structure, fitting metadata, timecode implementation, will you need to continually deal with colour correction and more.

But what if a filmmaker needs to use specialised gear in their film that an approved camera isn’t suited for, such as action cameras, drones, and slow-motion camera? These cameras are completely different from the cameras on the approved list. Some of them have low resolution, smaller sensors, and lacking a heat management system, and Netflix’s high standards make it much more challenging for manufacturers to produce equipment that can hold up.

“It’s always a struggle to try and balance the practicality of a camera’s intended use case versus image quality,” Prygrocki says, but Netflix does allow these cameras to be used where their specialty is necessary. These are called non-approved cameras which can be used on set in specific situations, and can only be done so under Netflix supervision and authorisation. This process is done on a case-by case basis.

“Even when you’re shooting with non-approved cameras, we want you to follow some basic rules, like shooting at the highest resolution, capturing at the highest data rate, and recording at a wide color gamut and log curve when and where it makes sense. Following these basic guidelines can help maintain optimal quality even when not using an approved camera,” he continues.

All of Netflix’s current “approved cameras” can be seen on its Partner Help Center, along with all of the other resources that the company has put together to help filmmakers create the best content.

Well, yes and no. The answer isn’t that simple. Serving kind of as a third-party verification for a camera’s quality, if Netflix says it’s a good camera, it’s a good camera. This is supported by Netflix’s uncompromising reputation for demanding high-quality original footage to create its own content.

While it shouldn’t be the only consideration, purchasing a Netflix approved camera might be something to consider. Many of these cameras are an investment for filmmakers. If you are working with an independent production, Netflix approval helps futureproof the work so that if you are looking for a distributor, you are at least fulfilling their expectations. As such, the camera technology decisions Netflix makes matter if you want to get your new film, series or documentary you’re shooting shown on streaming services such as Netflix. It is good to know that investment at least has the specs required to ensure the expected quality of a Netflix Original.

Having a basic list of solid cameras that have already gone through a stringent quality check to choose from simplifies a part of your selection process. Instead of spending countless hours researching all the different features of video cameras, sensors, codecs, aspect ratios etc. you can head over to Netflix and just select what makes sense for your production.

So, if you are a professional, Netflix-approved is a good start, but it shouldn’t necessarily be your defining factor. There are many cameras out there capable of producing images to match those on the list.

Netflix’s approval process is for high-end production and, therefore, demands certain capabilities that not everyone needs. If you are working mostly for yourself or on small YouTube projects, you don’t need all those expensive extras.

If you are looking for a new camera and have some questions, please feel free to contact our sales team

Here are some of our favourite Netflix Approved cameras:

This compact, versatile and lightweight camera brings RED’s legendary RAW codec and image quality to a small formfactor and decent price point within the realm of cinema camera. RED used the Canon RF lens mount and the Komodo’s 19.9MP Super35 CMOS sensor, which boasts Global Shutter technology. This sensor can create images with 16+ stops dynamic range, eliminating rolling shutter artifacts. Users can also be certain they are getting RED quality thanks to the ability to record up to 6K at 40 fps, 5K at 48 fps, 4K at 60 fps, and 2K at 120 fps in REDCODE RAW for incredible post-production flexibility.

A first for RED is the ability to use Phase-Detect Autofocus with compatible lenses. Additionally, the touchscreen can be used for quickly changing focus and selecting subjects.

The Canon EOS C70 can record up to DCI 4K 60p resolution video to dual slots using SD cards. High frame rates can be recorded in 4K up to 120 fps and up to 180 fps in a 2K cropped Super16 mode. Codec options include Canon’s XF-AVC, XF-AVC Intra, and XF-AVC Long GOP, providing up to 10-bit, 4:2:2 DCI 4K images with reduced storage requirements. To boost your post-production workflow, the versatile EOS C70 supports both proxy recording rates and simultaneous recording in different formats, including 4K/HD and XF-AVC/MP4 options.

Canon EOS C70 can be used for any shoot as an A camera however, it can also work as a B camera to your EOS C300 MK III allowing for smother workflows then a project hits the editing or colour grading suite.

The Sony FX6 may use the same BSI-CMOS sensor from the Sony A7S III mirrorless camera and majority of its video spec and autofocus, but it answers a real need for filmmakers that Sony’s mirrorless Alpha cameras do not. For shooting video, the FX6 has full professional cinema controls and ergonomics, multi-channel XLR audio, built-in ND filters, no overheating issues and a very long battery life.

The new Blackmagic Ursa Mini Pro 12K is the best of all in terms of resolution, as it shoots in 12K. Blackmagic wanted to make a camera capable of the very best resolution with a filmic look as opposed to looking too digital. Of course, shooting in 12K gives you an enormous amount of scope for cropping if you are making a film in 4K. It’s also good for extending the life of your footage for when 8K and up becomes the standard. It is also ideal for VFX workers who want maximum resolution for green screen work.

The smaller sensor of Ursa Mini Pro 12K is packed with tiny photosites. So, while not having the best high-ISO performance, the highlight roll-off and colour gradation are much more organic and like film.

A helpful feature for location work where lighting conditions vary is the built-in ND filter wheel offering four-position wheel switches between two, four, and six stops of neutral density, plus a clear filter for no exposure reduction.

Footage is recorded to C-Fast 2.0 cards or the very fastest V90-class SD cards, or you can also plug in to a very fast SSD. To reduce file sizes, Blackmagic RAW gives you a choice of compression levels.

This is the only 12K cinema camera on the market at a similar price of other offerings that don’t even come close to its resolution, thus making it a great quality production camera that will last for a very long time in the industry.

The EOS C300 has been the go-to camera for many cinematographers over the years, so the release of its third iteration has really cemented this camera as a production workhorse, and one of our firm favourites. The EOS C300 is the first camera to benefit from Canon’s Dual Gain Output technology (in other words, dual native ISO) which results in a remarkably clean, low light picture quality, HDR acquisition and an enormous 16 stops of dynamic range. It’s capable of recording up to 120fps in 4K Super35 or 180fps in 2K Super16. Internal recording options include 4K Cinema RAW Light at 10-bit or 12-bit, 2K Raw at 10-bit or 12-bit and XF-AVC (MXF) at 4:2:2 10-but ALL-I or LongGOP. Its modular design means that you can change the lens mount between EF, PL or EF Cinema Lock without needing to take it in.